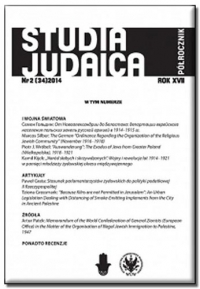 Summary/Abstract: Samuel Jakub (Shmuel Yankev) Imber (1889–1942), a Yiddish and Polish poet and critic, can be regarded as the spiritual father of modern Yiddish poetry in Galicia. He wrote also for Polish-Jewish press, trying to improve the image of Jews in the eyes of their Polish fellow citizens. This matter was a major concern already in his long poem Esterke (1911), one of the high points of Imber’s oeuvre in which he called for a harmonious coexistence of Jews and Poles. In the 1930s, when antisemitism was on the rise in Poland, Imber published two collections of articles in Polish: Asy czystej rasy [The Purebred Aces; 1934] and Kąkol na roli [The Weed in the Fields; 1938], in which he sought to counteract the ways in which Jews had been portrayed by the Polish nationalist press. The article discusses the significance of the poem Esterke and of selected texts from both collections of articles.