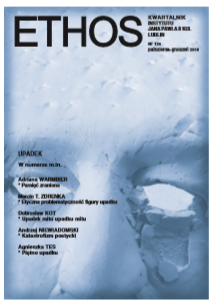 Summary/Abstract: The author presents a brief outline of Karl Marx’s concepts of economic alienation and social revolution (the latter conceived of as fight for human emancipation) in order to confront them with Karol Wojtyla’s theory of participation, which is the main focus of the considerations. Unlike Marx, Wojtyla holds that, rather than the economic relations, it is the category of the ‘neighbor,’ together with the derivative commandment of love (“thou shalt love...”), that provide the deepest ground for participation. Therefore, Wojtyla emphasizes that the Marxist theory of alienation is essentially the antithesis of the theory of participation, while the postulate of a class-struggle-based revolution, which follows from the theory of alienation, deepens the condition in question rather than contributes to overcoming it. In the concluding part of the paper, the author refers to the fact that Pope John Paul II did not consider overcoming the so-called socialist system, which began in 1989, as the end of working against alienation. Rather, he would stress that the problem of alienation is still acute, since alienation is now engendered by materialistic consumer attitudes which undermine the possibilities of participation. The author holds that the mark of the consumer mentality characteristic primarily of Western societies is that their members are no longer aware of the alienation they experience and, consequently, they no longer strive to overcome this condition.