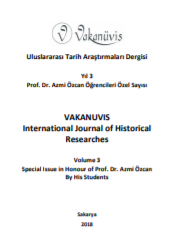 Summary/Abstract: During the First World War, the Ottoman State had been in two different blocs with Britain, and had bloody struggles in many areas. The Ottoman Empire, which was defeated in most of the conflicts, was able to stop the Allied Powers that Britain took the head at the Dardanelles Front. Çanakkale was a very important region for the defense of the capital city of Istanbul and the passing of this place would mean the fall of Istanbul and the Ottoman State being out of war. Thousands of people have lost their lives or been captive in the battles in the sea and on land in order not to give way to Allied powers. Turkish soldiers captured by Britain were transported firstly to the island of Limni and then to Egypt by ships. The prisoners who had reached Egypt, under British domination, were held in 9 different camps. The living in the desert on in the city center camps were placed in in the chambers or wards according to their ranks. High-ranking soldiers were given equerry. Life conditions were changing from camp to camp. The physical conditions of the camps and the present number of the prisoners were of great importance. While military officers were concentrated in some camps, some camps were organized for civilians even a camp was established for soldiers' wives. Considering the current conditions of war, there is no expectation of comfort in the bondage life as it was in the pre-war period. The British were abused Turkish prisoners held in the camps and even attempted to intentionally kill the Turkish prisoners by means of carving eyes. The attempt of the Turkish soldiers to blind and kill them is one of the most painful memories left in mind of the camps in Egypt.