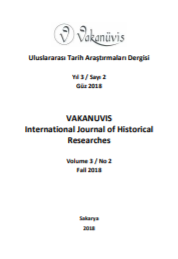 Summary/Abstract: The lack of information about Saltuq Bey, who was one of the Turkish commanders who took part in the conquest of Anatolia, caused his identity to remain hidden. In this study, it was tried to solve this problem within the framework of his struggles and his establishment of a state in Erzurum and its environs in the easternmost part of Anatolia with the groups affiliated with him as a Turkmen beg. Historical sources giving information about these events were used to solve this problem. Along with the difficulty of revealing new information, the information at hand was examined from various angles, and it was attempted to show the identity and struggles of Saltuq Bey and how the Saltuqid Principality was founded.