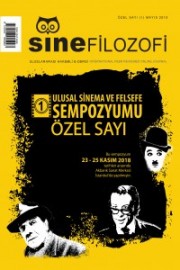 Summary/Abstract: The concepts of Deleuze “becoming woman”, “Body without Organs” and “desiring-machine” are reconsidered by feminist philosophers and philosophers such as Jardine and Irigaray were critical of these concepts. In the literature, these studies are accepted as the starting point of Deleuzian feminism. Jardine, in his study of Irigaray, draws attention to the fact that the concept of “Body without Organs” causes the female body to be positioned in almost the same way as the patriarchal system, and the neutrality of these concepts argues that the arguments such as demoralization open the door to the repositioning of the female body into masculine domination. Braidotti argues that the concept of “becoming woman” ignores the masculine view which is criticized by feminist theory and movement. In this study, it is aimed to analyze the experiences of female characters in Yeşim Ustaoğlu’s film Clair Obscur (2016) within the framework of the concepts discussed by Deleuzian feminists. Content analysis was chosen as a method for qualitative research methods. Ustaoğlu reflects the experiences of two women living in a culture surrounded by patriarchal norms, while revealing the masculine view through male characters who see the woman as bir the machine that reduces or reduces the woman to the sexual object.