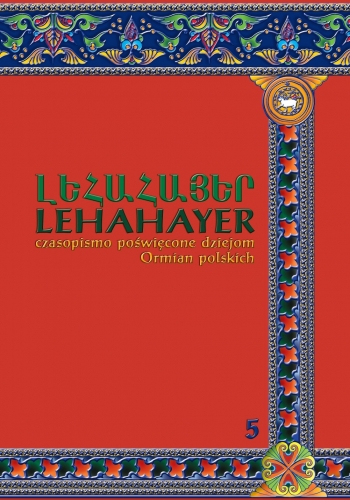 Summary/Abstract: Armenians living in Kingdom of Poland and Great Duchy of Lithuania were mostly burghers, however, cases of social advancement were noted on Ruthenian territory officially belonging to the Crown. Initially, the advancement was possible only for royal court-based Armenian translators, but later also for those with merits for the country’s defence. Another way to advance socially was to marry a Polish nobleman. In such marriages religious differences rarely posed a serious problem; generally, females did not need to convert from their Christian Armenian denomination. Nevertheless, ennoblement was rarely attractive for Polish Armenians at that time; trade and other typically burgher activities brought more profit than the landownership privilege. For this reason ennobled men and their descendants often took on those activities anyway and pleaded their noble status only to escape inconvenient legal consequences or town court. A few Polish noble families of Armenian origin are dated back to that time: the Tyszkiewicz, the Siekierzyński, the Balicki, the Zwartowski, the Sołtanowicz-Chalepski, the Lenkowicz-Ipohorski, the Iwaszkiewicz, the Makarowicz, the Domażyrski, the Pleszkowski.