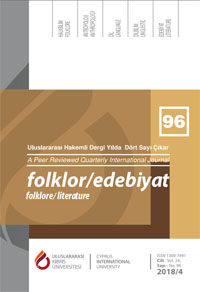 Summary/Abstract: Style is the most powerful weapon that a writer uses in his work to reflect to readers his feelings and thoughts about a situation or event. The author makes a difference by putting the emotions and thoughts which he wants to convey through this tool. The manner in which the author uses the language and the language units in his works determines the style of his work. Also, it is the essence of what the author wants to tell us through the words. In this respect, the expression tools that an author uses in his work reveal the author’s style. The Russian humorist Arkadi Avercheno has a distinctive style in his work called “Black power”. He effectively applied satirical, humor and grotesque elements in his work. The most prominent elements of the stylistic feature of his works are the symbols and rhetorical figures reflecting the power of his expression. The author wants to draw the reader into his work with a dialogue style of expressive technique. He enriches his expressive mastery with literary symbols and rhetorical figures used during editing. The aim of this study is to analyze the humor of the master of Russian literarture Arkadi Averchenko, and the expressive power in his work “Black power” by examining the symbols and rhetorical figures of comparison and personification.