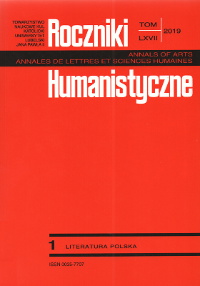 Summary/Abstract: The article analyses Akatyst ku czci Bogurodzicy [Akathist to the Mother of God], which, together with the accompanying icon, was one of the important components of the Marian Orthodox cult, whose influence went beyond the Orthodox Church, affecting among others also Polish lands. The aim of the article is not to develop a monograph on this phenomenon, but, focusing on the recognition of its complex media characteristics, to study various forms of its performance and to pay special attention to the performativity aspect. The purpose of this characterization is to bring out the complex functions that the Akathist performed, serving the purposes of memory – having also a heterogeneous character, realised in various ways and playing different roles. The analysis encompasses selected research fields – history of literature, religion and culture from the perspective of changes in the media of words, as well as art history.The second part of the article shows analogous phenomena in the Polish Marian song and traces its relations to the Akhatist to the Mother of God. In particular, the analysis focuses on the song O przenasławniejsza panno czysta... The structure of the akhatist icon was reflected in the Gothic altar stands in Lesser Poland, in which the image of the Virgin Mary of the type of Madonna Piekarska was centrally placed, surrounded by other representations.The key concept for the article is the litany tradition, which is understood here broadly, i.e. including specific language formulas, the communication strategy, issues of presence, mnemonic formulas, the ideas of spatial relations, movement and performance. In conclusion, the article attempts to define the multi-aspectual character of this phenomenon, with particular focus on the dynamics of this tradition, the need to act and recall using memory.