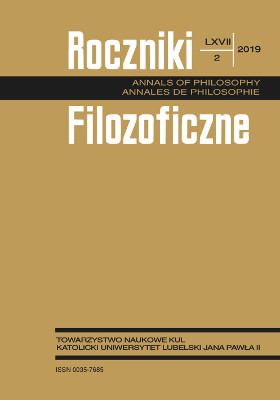 Summary/Abstract: The aim of the paper is to demonstrate that Gilbert Keith Chesterton possessed the genuine intuition of being as defined by the French Thomist, Jacques Maritain, albeit almost without the proper metaphysical habitus. It opens with some explanations of the terms used, and with a short extrapolation of the theory of the intuition of being. Next it proceeds to proving the thesis assumed by the means of demonstrating that Chesterton exhibited the intuition of being as to three most important elements: its proper object (with the principle of identity included), the principle of sufficient reason and the principle of finality. Next it attempts to demonstrate that despite that understanding, he never spoke in a properly metaphysical manner, the fact that points to the lack of metaphysical habitus, and to establish certain consequences of this state of things. The text ends with a list of practical conclusions that could be drawn from an analysis such as this.