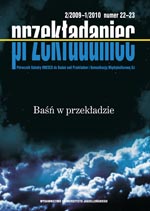 Summary/Abstract: Błażej Kaźmierczak has compiled a Karl Dedecius bibliography which lists about 800 items: books, articles, anthologies, interviews. However, Karl Dedecius’s Works. An Annotated Selected Bibliography (Dzieła Karla Dedeciusa. Wybór bibliograficzny adnotowany) is still not complete. One reason for its incompleteness is the breadth and variety of this eminent German translator’s output. Another is the meticulousness of the Polish scholar, who has not included into his bibliography some of Dedecius’s works, because – for example – their pages are not numbered. While such a scholarly pedantry might be regretted, it is worth pointing out what makes this publication so valuable: the publication has been prepared in close cooperation with the Karl Dedecius Archive in Słubice and it is the fi rst volume in the planned series Scripta Caroli Dedecii. Among the items listed by Kaźmierczyk we can fi nd Lektion der Stille, the anthology of Polish poetry in Dedecius’s translation published in Munich in 1959. To justify the claim of this book’s literary, cultural and even political importance, it is enough to point out that its bilingual edition was issued in Poland in 2003. Marek Zybura’s The Lesson of Silence in the Voices of German Critics (Lekcja ciszy w głosach krytyki niemieckiej/ Lektion der Stille. Deutsche Stimmen) collects German reviews of the anthology and presents them in his Polish translation. The German critics express their surprise at the achievements of Polish poetry, its rich dictions, universalism, “hope,” “intimate delicacy,” not least because it managed to reject totalitarian ideology. It showed in print “what in East Germany could not be even thought.” The critics expressed their concern with the fact that fourteen years after WWII they still did not know much about Polish literature. Therefore, they highly commended Dedecius’s selection and praised him as “a translator of empathy.” Interestingly, Zybura’s translation refl ects Dedecius’s strategy of domestication – his book demonstrates how literature and literary translation can contribute to the reconciliation between (the two) nations.