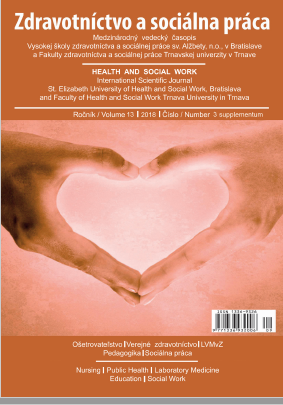 Summary/Abstract: And years go by ...... Inside, people can stop in the world, but what they never stop is time. Time is the river of our life. It is day by day, year after year, and we sometimes get to see it flowing in order to realize a certain milestone in our lives. In this period, we recall the milestone of ten years of establishment of a detached workplace of the University of Health and Social Work, Elizabeth, based in Bratislava in Partizánske, covered with two patrons, namely St. Cyril and Method. This milestone was one of the most important events in the district of Partizánske, as well as in the district itself. I have the honor to honor you today for the occasion of the XIV. Scientific Conference with International Participation under the title "Health and Social Issues of the Regions in the 21st Century" to familiarize themselves with the very origins and ten - year history of our institute. It all began with the idea of establishing a Partizan college which, by its origins, moved the city and gave it credit to the university city.