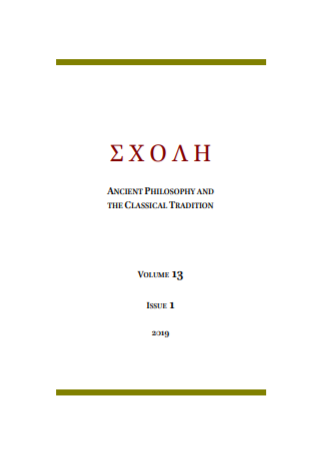 Summary/Abstract: Analyzing the famous passage Eccl. 12:5b–7, the author of the article comes to the conclusion that the expression "the almond tree blossomed" (12:5bα) contains the allegory of man’s birth and his young years; the phrase "the locust/locust tree became loaded" (12:5bβ) can be interpreted as an indication of the mature, productive/fruitful years of human life activity; the allegory of the caper, falling to winter ("and the caper bush fell"; 12:5bγ), correlates with the metaphorical description of old age and the approach of death in Eccl. 12:1b–2. So, one can assume that the passage Eccl. 12:5bα–γ includes the allegories of man's earthly birth, making up of his personality, maturity and old age in the form of natural phenomena that take place in Judea throughout the year — approximately from the second half of January to December. The allegory of the breaking "silver cord" (Eccl. 12:6aα), symbolizing the earthly demise, can be understood as a break in the connection between the spirit and the flesh of man (cf.: Eccl. 12:7). In 12:6аβ–b, Ecclesiastes adduces the allegories of death, expressed through the broken vessels ("golden bowl", "jar", a certain "vessel"), symbolizing the human body. The context also suggests that an allusion to the human spirit implicitly present in these allegories as well, which is symbolized by olive oil (in the "golden bowl") and water (in the "jar" and in the "vessel"), — not directly called, but contextually implied — returning to their eternal Fountain (cf.: Jer. 2:13, 17:13, also: Ps. 36:10) when their temporary receptacles are broken. The "spring" and the "well" (Eccl. 12:6b) are veritable symbols of life, and in the light of Eccl. 12:7b — perhaps symbols of eternal life in the Book of Ecclesiastes. As for the allegory of "the golden bowl", it clearly goes back to Zech. 4:2–3. In the light of the allegorical picture attested in Zech., chap. 4, and the text of Eccl. 12:7b, the allegory of Eccl. 12:6aβ — "the golden bowl will crack" — can presuppose implicitly not only the death of the body/"the golden bowl", but also that its contents — "oil", symbolizing the spirit abided in the body — will merge with the "oil" of the Divine Luminary, scil., with the Spirit of God.