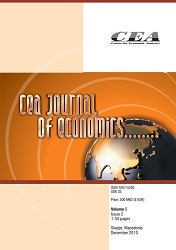 Summary/Abstract: The aim of this paper is to measure the relative efficiency of the commercial banks in Macedonia by using the non-parametric methodology Data Envelopment Analysis (DEA). The key role when applying DEA for measur-ing the efficiency of entities is given to the selection of inputs and outputs. In our study 3 inputs and 3 outputs are selected according to the intermediation approach. The sample consists of 14 banks and the observed peri-od is eight years (2008-2015). According to the obtained results, the average efficiency of the Macedonian banking sector in the observed period is 88.77%. There is no bank that is relatively efficient in every year in every window. The results indicate that 28.57% of the banks have an overall efficiency by years that is higher than 95%. The group of large banks has the highest efficiency in the Macedonian banking sector. Furthermore, Macedonian banks have noted lower efficiency in the post-crisis period. Findings from our paper are valuable for further use by regulators, policy makers and bank management in order for the efficiency of the relatively inefficient Macedonian banks and the banking sector as a whole to improve.