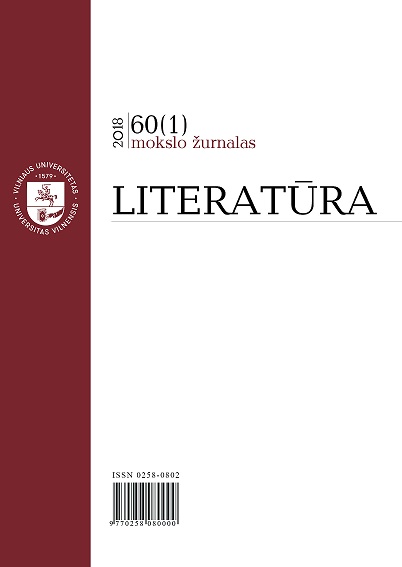 Summary/Abstract: This article analyzes the perception of women’s identity as it was created in the press in the period of Nikita Khrushchev’s rule (in the magazine Tarybinė moteris, “The Soviet Woman”) as well as in the poetry written by both men and women of the so-called 1930s generation. By taking a closer look at discourses across different levels, connections, conflicts, tensions, denials and contradictions were revealed, uncovering the complicated and tense relationship between the ideological, masculine and feminine paradigms that offer different identities. This serves to demonstrate how men and women have tried to accommodate their traditionally inherited, personal relationships with ideological perceptions. After describing the engineering of a woman’s image in the magazine and analyzing the images in male and female poetry, it became clear that this version of Soviet feminism was more regularly and consistently realized by men in their work, who had described the process of creating the Soviet world (the emergence of collective farms and the role of women in this process, ideological connection between the woman and the new order etc.). It was revealed that women were much more likely to be portrayed as negative characters in respect to the system than men, their worldview being based on values inherited from the interwar Lithuania, determining their obscurantism and secretive life. The emancipation of women in men’s discourse is almost without exception based on directly transposed Soviet postulates. A more personal perspective and relationship with a woman emerges as a traditionally inherited patriarchal paradigm of the woman-as-a-mother identity, which is disassociated from the Mother Heroine image by a personal and intimate articulation of the relationship. The images of the emancipation of Soviet women that appear in male poetry are taken up as postulates of the new system, but these images are never incorporated in the articulation of their worldview, always remaining as part of the new society’s architectonics. In the work of J. Degutytė, the only more prominent female poet of the period in question, two directions in the conception of women’s identity are observed: the official one, which shows the adopted image of hyperreality as being at the core of the new woman’s identity, an assumed woman’ self-image as being responsible for social sensitivity, and the stance of the party-appreciating mother. When the self-image of a woman is not thematized but rather manifests itself as the self-awareness of the speaking female subject, the female “I” appears as the acting subject that transforms the female attributes (emotionality, sensitivity etc.), traditionally perceived as restrictive, into opening up opportunities for action and possessing an existential perspective. The most intense exposure of the female subject to the world is portrayed as an act of creativity, whereas the creative aspirations of women in the poetry of men of the same time are associated exclusively with childbirth.