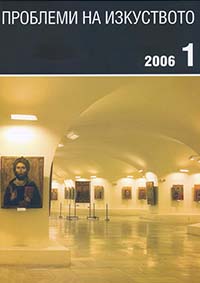 Summary/Abstract: This article is devoted to a Medieval icon from Nessebar, known as the Virgin - The Lady of Life. The study is an attempt to analyze the specific features of the icon from the point of view of an ideological paradigm, characteristic for late Byzantine Art. The analysis shows that the symbolical emphasis is of essential significance within the structure of the icon. The icon from Nessebar is not simply an icon of the Virgin with Christ. A series of iconographic details directs trained viewers towards associations by far beyond the concretcness of the image. The attire of Christ is also loaded with a symbolical meaning. The translucent chiton represents the visualization of the theme of the vulnerability of Christ's body. The orange-red himation, recalls on the one hand the regal origins of Christ, from the line of David, and on the other, his Divine origin. The figure of Christ in the icon from Nessebar, half lying, is associated symbolically with the Lamb of God. incorporated in the consecrated spaces. At the same time, according to Medieval theologians and liturgists, it was Christ who offers the Holy gifts. That is why his gesture is an analogue of the blessing, through which the priest realizes the mystery of the Transubstantiation. Being supreme prelate, Christ is blessing. Being the one who is incorporated in the liturgical bread, he receives same blessing. In the Middle Ages the Virgin was one of the traditional images of the church and this symbolism was also present in the icon from Nessebur. Most characteristic is the gesture through which the Virgin supports the himation of Christ. The gestiture is identical to the gesture of the Deacon holding his oiarion. The same gesture of the Deacon is a reminder towards the priest, given three times, during the epiclesis (invocation). Throughout the 13th and 14th century this moment of the liturgy had become subject of a serious polemic between Orthodox and Catholics. The analysis of the specific iconographic features of the Nessebar icon was directed towards suggesting liturgical associations. The Virgin-church (or more precisely the Virgin-Holy altar) presents the believers the Lamb of God incorporated in the liturgical bread and bearing on itself the sins of the world. The iconographic and stylistic observations indicate that the Nessebar icon was probably made in the 70s-80s of the 13lh century. Our iconographic type had arisen in Byzantine art as early as the Comnenine period. During the second or third quarter of the 13th century a new iconographic variant had emerged within this framework. Its main feature was the transparent chiton of Christ. Some Gothic techniques indicate that it arose in Catholic or Uniate circles.