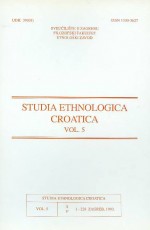 Summary/Abstract: The beliefs connected with the Earth and its cult belong to the important components of the religion of the Konkomba and other peoples of West Africa. The Earth Kiting is mother of heavenly god Uwumbor. The personified divinity Kiting is a universal deity of all the Konkomba. It is manifested in the multitude of Earth spirits, protectors of particular clans. The Earth spirits are male or female. Each clan has its own Earth shrine called litingbaln which symbolizes and personifies the local Earth spirit, the protector of all members of a given clan. The Earth shrine is the most important sacred place of the clan and the main center of the Earth cult. The author of the paper presents the names, places and kinds of Earth shrines and provides an interpretation of the ritual performed in the shrine of Earth spirit Naapaa in the village of Bwagbaln. The purpose of the study is to show the social and religious meanings of the Earth shrine in Bwagbaln as the main cult center of five clans of the Bichabob tribe. The source basis was provided first of all by the author's field work conducted among the Konkomba people in the area of Saboba between July 1984 and January 1985 as well as between September 1990 and August 1991. The Earth shrines among the Konkomba usually consist of baobabs and groves. Under the trees and in the groves there are sacrificial stones fulfilling the function of an altar on which offerings are made. The Earth shrines are usually situated in the vicinity of the homesteads or on the border between the arable land and the bush. As opposed to other clan Earth shrines of the Konkomba people, the Earth shrine in Bwagbaln is of clan and supra clan character. As the symbol of the unity of five clans from the Bichabob tribe, it is the most important Earth shrine and the central place of cult the members. The Earth cult of the Konkomba is first of all connected with such seasonal agricultural activities as making preparations for yam planting, corn sowing and for the harvest. The ritual in Bwagbaln was performed on 24 March, 1991, that is in the dry season, before the field work. Its principal aim was to ask for the rain. The ritual performance in Bwagbaln is a condition for beginning the field work in the new agrarian season and it precedes the rituals connected with Earth in the homesteads and Earth shrines in the villages of Nalongni, Kumwateek, Kiteek and Bwakul. The ritual in Bwagbaln had the greatest supra clan range and in that ceremony over 20 elders participated who were representatives of major lineages and clans from Bwagbaln, Saboba, Tilangben, Nalongni, Kiteek, Bwakul (Ghana) and Yoborpu and Lagee (Togo). The participants of the ritual are connected with each other by means of clan community bonds (unibaan), ritual bonds (mantotiib) as well as friendship and neighborhood bonds.