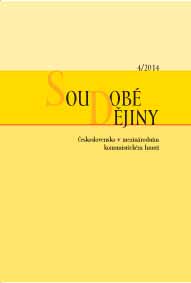 Summary/Abstract: The article is concerned with the relations between Nicolae Ceauşescu (1918–1989), the General Secretary of the Romanian Communist Party and Chairman of the State Council of the Romanian Socialist Republic and, on the other side, Josip Broz Tito (1892–1980), the Chairman of the Union of Communists of Yugoslavia and President of the Socialist Federative Republic of Yugoslavia, as they developed at the political level from 1966 to 1969, when the reform Communist movement in Czechoslovakia was coming to a peak and was soon crushed. This analysis by a Romanian historian draws mainly on records recently made accessible in central Romanian archives, which relate to the five meetings between these two senior politicians in this period. The author outlines Romanian-Yugoslav relations from the 1950s onwards, and discusses their place in the international Communist movement, which was also the main subject of the talks between Tito and Ceauşescu. It was in the interest of the two leaders to maintain the greater room for manoeuvre which they won from the Soviet Union. That was supposed to prevent the buttressing of Soviet dominance in the ‘Socialist camp’, which the Romanians in particular tried to use to compensate for friendly relations with the People’s Republic of China. The author argues that the mutual relations between Tito and Ceauşescu were based on trust and stemmed from the identification of common interests, which enabled them to coordinate foreign-policy positions and surmount particular disagreements. This strategic partnership was also manifested in the open Yugoslav and Romanian support for the Prague Spring, the most striking declarations of which were the two Prague visits by the two heads of state on the eve of the Soviet-led military intervention in Czechoslovakia, and afterwards in their negative positions on the act of aggression. Tito and particularly Ceauşescu saw the August occupation of Czechoslovakia as a direct threat to their own security, and they consulted each other about possible ways to avoid, or face, eventual Soviet military intervention in their own countries. The author attributes considerable influence to Tito in changing Ceauşescu’s rhetoric from a confrontational public condemnation of the occupation to a pragmatic confirmation of loyalty to the Kremlin. The two heads of state henceforth chose a path of restraint and sought to improve relations with the Soviets, without abandoning their disagreement over the occupation or their resistance to Soviet hegemony. Ceauşescu’s most resolute gesture of resistance was to welcome the US President, Richard Nixon, to Bucharest in August 1969.