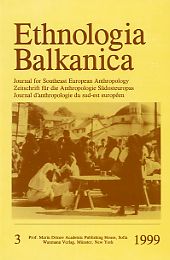 Summary/Abstract: The dramatic events which have shaken Europe during the ten years following the dissolution of Yugoslavia, particularly the last episode which has pitted the Serbs and the Albanians against each other on who owns the Kosovo, have implicated the entire international community in the defense of a certain model of society and interethnic relations. Public opinion, muffled by the noise of the media and the intellectuals, has not always understood the significance and the reasons for the conflict which everybody hopes to see finished once and for all with this last and final bloody episode. Following an introduction into the characteristics of the region, defined as a culture area, and on the development of Serbian and Albanian nationalism which never failed to exacerbate the situation at any moment, the article attempts to integrate an anthropological approach into historical and geopolitical considerations on the Albanian region and culture. It also raises a question which appears to be essential for the understanding of current events: to find out if the historical heritage and the cultural identities can reasonably justify, or at least explain the ethnic conflicts and the nationalism, or if they, on the contrary, simply serve to determine and at best rationalise the interethnic relations between social groups.