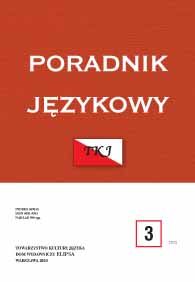 Summary/Abstract: This paper concerns the formation of the official variant of Polish in the mediaeval state of the Piast and Jagiellonian dynasties (until 1543) and its subsequent development in the Polish-Lithuanian Commonwealth (until the end of the 18th century). The author states that the Polish language was one of several codes which functioned in official communication at that time. Therefore, its condition and significance cannot be described in isolation from relations with languages such as Latin, German and Ruthenian. A substantial context for the development of the administrative variant is constituted also by evolution of other functional styles of the ethnic language. What is also important is changes in extra-linguistic areas (related to the legal system, socioeconomics and culture), which the author identifies, offering periodisation of the history of official Polish from Middle Ages to the present day in the conclusion part.