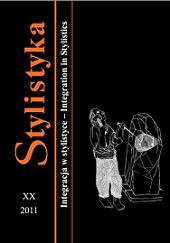 Summary/Abstract: This paper provides a synthetic overview of the research approaches to date which refer to the sphere of legal and judicial communication, with particular attention given to disciplines such as rhetoric, stylistics and linguistic textology. This overview is aimed at presenting a certain tradition of research on the style of utterances performed in the sphere of legal and judicial communication, on the one hand, and at indicating deficiencies within the discussed issues and description methods employed, on the other hand. The author emphasises the significance of the discussion on the so-called judicial genre in the classical rhetoric and the development – on the ground of Slavic stylistics – of the concept of social functional styles and, in relation to this, the distinction of the so-called administrative style, which includes the legal discourse. She also appreciates the pragmatic and communicative breakthrough in linguistics which occurred in linguistics under the influence of the theory of speech acts by J. L. Austin and J. R. Searle. The combination of research on speech acts with the analysis of the genre and style diversification of utterance seems particularly fruitful when referred to the legal and judicial discourse. The aim of the researcher is also to outline the prospects for further research which might be inspired by achievements on the ground of linguistic genology and new stylistics which take advantage primarily of the pragmalinguistic and cognitive inspirations. The author also points to research areas in which interdisciplinary cooperation between linguists and law theoreticians would be desired.