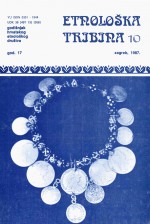 Summary/Abstract: The article is dedicated to the Croatian humanist Juraj Šižgorić of Šibenik, revealing his role in the development of ethnological interest among the Croats. Šižgorić published the first collection of Croatian folk proverbs (having translated them into Latin), but it was last during later centuries. In the tractate On the Location of Illyria and On the City of Šibenik from 1487, he was preoccupied with the ethnogenesis of the people who inhabited former Illyria, and showed great knowledge of classical writers, history and geography. The study is of interest also to ethnologists, since it contains the descriptions of some mores of the Šibenik's populace. Both the tractate and Šižgorić’s elegies are permeated with honest patriotism and concern for his homeland which was at that time endangered by Turkish conquests. His elegies are perhaps the most dramatic and most touching call on Europe of the 15th century that came from our lands.