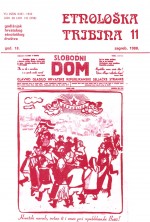 Summary/Abstract: The author analyzes the Chronicle as an exceptionally important source for the study of the germs of ethnological thought among Croats. Although created in the remote 13th century, the Chronicle reveals some of its author’s preoccupations which have parallels in contemporary ethnology. Among other things, Toma Archdeacon was interested in the elthnogenesis of Croats. He attempted to solve the riddle with the help of Various written sources, oral traditions and partly by own speculations. His methods reveal a serious and honest approach to solving problems. An interesting part of the Chronicle contains an exhaustive description of the Tatars, being the oldest account on a foreign people in Croatian historical literary sources.