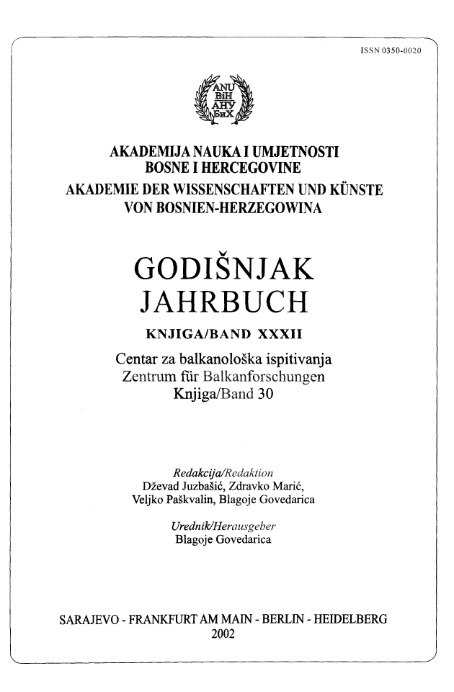 Summary/Abstract: Occurrence of periodical (occasional, temporary, seasonal) shepherds’ settlements in the Bosnian-Herzegovinian area dates back to the ancient past. Here, as well as in the wider Dinaric region, they have taken roots along with the semi-nomadic way of livestock breeding. With the beginning of the 20th century, along with reduction in the number of livestock and disappearance of transhumance, the number of periodical settlements was diminished in Bosnia and Herzegovina, and in the majority of the remaining ones the number of buildings was reduced. Periodical shepherds’ settlements did not disappear even in the late 20th century since, besides the existing individual extensive livestock production, seasonal migrations to mountain pastures and hayfields existed in numerous environments. Most of the Bosnian-Herzegovinian periodical shepherds’ settlements in the 20th century were placed in the Central Dinaric area of the country, and mostly belonged to the livestock breeders from Herzegovina and foothill villages of the Bosnian Central Dinaric region. Summer, spring, autumn and winter settlements could he distinguished according to the season of inhabitation. Those settlements, which according to the ways of production belonged exclusively to shepherds, or were mixed ones, belonging both to those who bred animals and cultivated land, consisted of small groups of irregularly arranged buildings, where some of the household members from one or more villages dwelled and took care of the livestock that was fed out of the village, and sometimes members of the same; household who were in charge of agricultural production on small mountain plough-fields, or of hay gathering from the mountain meadows. One kind of periodical settlements consisted of a group of sheds for shepherds, and sometimes there was a fenced ground for their animals next to them. In the other kind of settlements, next to the dwelling buildings there were one or more buildings for livestock and food. The differences between those two variants of seasonal settlements were in close connection with the issue of the ownership of land where buildings were erected. Shepherds decided on bigger investments in seasonal settlements’ buildings only when they were built on their own land. The choice of the buildings was also conditioned by the season of their stay there, as well as by the character of the settlement, i. e. whether it was exclusively a shepherds’ or mixed one, inhabited through time by both shepherds and those who cultivated land.

Spratne seoske kuće Bosne i Hercegovine – Prilog proučavanju tradicionalne kulture stanovništva u Hercegovini Rular storey – houses of north Herzegovina – A contribution to a study of the traditional culture of housing in Herzegovina 1991 Savremeni procesi u kulturi stanovanja u ruralnim sredinama Воѕпе i Hеrсеgоviпе The modem processes and culture of inhabitansy in the rural environment in Bosna and Hercegovina 1992 In memoriam In memoriam 1996 Organizacija počivanja u tradicionalnoj kulturi ruralnog stanovništva Bosne i Hercegovine Organization of Reposing in Traditional Culture of Rural Population in Bosnia and Herzegovina 1996 Kamene kuće Livanjskog polja i njihovi graditelji – Prilog proučavanju bosanskohercegovačke graditeljske baštine Stone House from Livno Field and Their Constructors 1997
2021 © CEEOL. ALL Rights Reserved. Privacy Policy | Terms & Conditions of use
ICB - InterConsult Bulgaria ver.1.5.2414