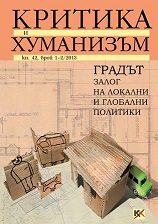 Summary/Abstract: The article focuses on the images of the modern city and urban culture on the conceptual map of Bulgarian eugenics projects. The eugenic rhetoric of “degeneration” and “regeneration” is studied in its links to certain culture-political visions of modernity, national identity and citizenship. The analysis addresses the following questions: Why and how did eugenics in Bulgaria imagine the city as a location of disease and decay? How did the eugenics discourse suggest to “normalize” degenerate urban dwellers? In what “doses” did eugenicists prescribe the rustic way of life as a healthy antidote to urban degeneration? In trying to answer these questions, the study identifi es the points of divergence and intersection between eugenics and social hygiene in Bulgaria. These were the two main strategies of biopolitics, which specifi ed the hygienic needs of citizens and peasants as members of the “national organism”. The article examines how eugenicists and social hygienists constructed, but also destabilized, a rural/ urban dichotomy. It was derivative from a series of other oppositions: health vs. disease; nature vs. nurture; purity vs. dirt; autochthonous vs. alien, modernity vs. tradition. Eugenics in Bulgaria is therefore studied as a multiform hygienic utopia which confl ated conservative anti-liberal and anti-urban traditions with modern aspirations for bio-social engineering.