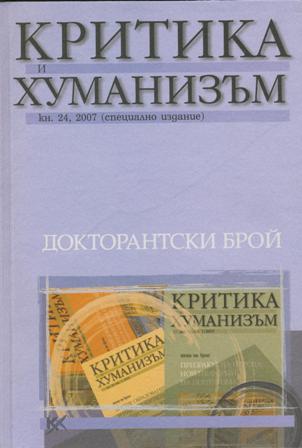 Summary/Abstract: The article examines aspects of physical education in the Bulgarian school system from the end of 19th century till the eve of the Balkan wars and WWI. The offi cial prescriptions to the school discipline, its institutional practices, and the strategies for their justifi cation presented in the public discourse, are subject of historical reconstruction. As far as school had a place of priority in the state institutional policy, the educational ministry underlined the signifi cant role of school gymnastics in fi ghting “degeneration” of the youth - the “future of the People”. The reception of certain clichés of the European discourses on “degeneration”, regarded as a continual regressive deviation of the human from an ideal type, provided a mechanism for description of cultural phenomena through organic coding. The imagery of “degeneration” was inscribed in the general concept of physical education as upbringing of body through double-code rhetoric of physical health as “the core of moral health”. The text argues that the school syllabuses defi ning the goals of gymnastics constructed a peculiar hierarchy of values in the ethics of body, namely “moral health – civil virtues – national wealth”, where the nation itself was presumed as the supreme good. Thus the strengthening of the school youth’s body was projected in the framework of a national identity project. In the period under review “fi ghting degeneration” through school had stronger rhetorical than disciplinary effects. This can be explained with the defi cit of cadres and fi nances, and with the fact that the notions of “degeneration” functioned more or less as fashionable “loanwords” and not as deeply refl ected imports from the lexicons of the contemporary bio-medical jargons in Europe. However, a tendency for “adjusting” body health models to images of social and national “health” can be detected, as well as the rise of a “bio-pedagogical” imagination as a bio-political one.