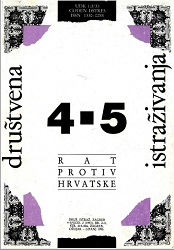 Summary/Abstract: Vukovar was, because of its geostrategical position, one of the first targets of Serbia's war conquest of the Republic of Croatia in 1991. Despite the Serbian Army's pronounced military predominance, the defenders of Vukovar managed (although completely surrounded) to resist the attacks for 80 days - inflicting serious human and material losses. Some 300 tanks and armoured vehicles were destroyed, as well as about 25 army airplanes; the number of dead Chetniks and Serbian soldiers ranges from seven to ten thousand, while twenty-five to thirty thousand were wounded. Due to the balance of forces, which was for the Croatian defenders highly unfavourable, and due to successful military results achieved ins pite of extremely modest weaponry, "the Vukovar phenomenon" is the subject of analysis at military academies world-wide.