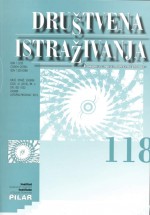 Osnovne značajke presuda jugoslavenskih komunističkih vojnih sudova u Hrvatskoj 1944. i 1945. godine
Basic Characteristics of the Verdicts of Yugoslav Communist Military Courts in Croatia in 1944 and 1945

Summary/Abstract: The paper is mainly the result of research of several thousands of verdicts of Yugoslav communist military courts. This historical material has so far been unused or little used in scientific research. The main topic of research are the basic characteristics of the verdicts of Yugoslav communist military courts in Croatia in 1944 and 1945. First, the basic structure of the verdicts is presented. Then, characteristics of individual verdicts from different Croatian regions are analysed in detail, and in the conclusion, the main overall features of surviving verdicts are given. This research has also confirmed that Yugoslav military courts in Croatia were revolutionary courts, and that they were part of the repressive system by which the Communist Party of Yugoslavia completed the process of establishing its totalitarian rule. From the individual verdicts it can clearly be seen that the trials at military tribunals were conducted according to ideological criteria and contrary to legal standards. The trials were quick and punishment merciless. Guilt was not proven based on concrete facts, while testimonies and arguments of the defendants were dismissed without consideration, with insults and degrading statements about the accused. Although the Decree on Military Tribunals prescribed the right to counsel for accused persons, the right was not realized by any of the approximately 5200 convicted persons whose verdicts have survived. And among them there were no acquittals.