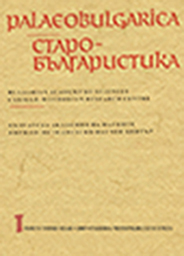 Summary/Abstract: The article discusses three archaic non-finite forms of the verb быти, occurring in the Old Bulgarian translation of Athanasius of Alexandria’s Orations against the Arians, composed by Konstantin of Preslav in 906. The emergence of the translation is explored in the context of Gothic Arianism and the filioque controversy. The study draws upon five of the ten Slavonic manuscripts containing the text: RNB, Pogodin № 968, dated 1489; RGB, f. 113, № 437, dated 1488; GIM, Sin. № 994, 16th c.; RNB, Sofijsk. № 1321, 16th c.; GIM, Sin. № 180, 16th c. The first archaism is found in the Second Oration where the single usage of the infinitive быту instead of быти occurs. So far this form has been found in only three early Bulgarian translations: the Edifying Gospel by Constantine of Preslav (GIM, Sin. № 262, 12th c.; Vienna National Library, Cod. Slav. № 12, 13th c.); Oratio XXXVIII in the 13 Sermons by St. Gregory the Theologian (RNB, Q.n.I.16, 11th c.) and the text about the oecumenical councils in the Ustjug Kormčaja (RGB, f. 250, № 230, 13th c.). A second archaic form of the verb быти is the participle in the First Oration бышещ-, which in the research tradition is considered to be a lexical marker of Old Bulgarian texts of East Bulgarian provenance. In this very same oration a third, an exceptionally rare non-personal form of the verb быти is to be found – namely, the participle бяе, known so far only from the text of the Apocalypse (1:8, 4:8, 11:17, 16:5). The two participles – бышещ- and бяе – are studied in the context of their semantics and their Greek equivalents.