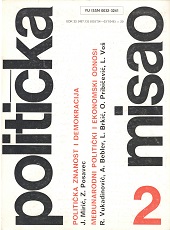 Summary/Abstract: The electoral victory of French socialists and the establishment of a socialist government in France brought new hope and new expectations not only to French, but also to all European progressive and socialistically oriented forces, concerning the possibilities of more radical social and political reforms even though capitalism continues to rule beyond that country’s borders. Special interest was provoked by the ideas of French Socialists, which were also proposed in the electoral program, relating to the nationalization of the greater part of private firms and to the inclusion of members of the French Communist Party into the government. Although it fulfilled a large part of its electoral promises of 1981, the Socialist Party of France was defeated in the 1986 elections. The author points to the main reason for this failure and also indicates the main changes which have taken place in French society since the beginning of the 1980s.