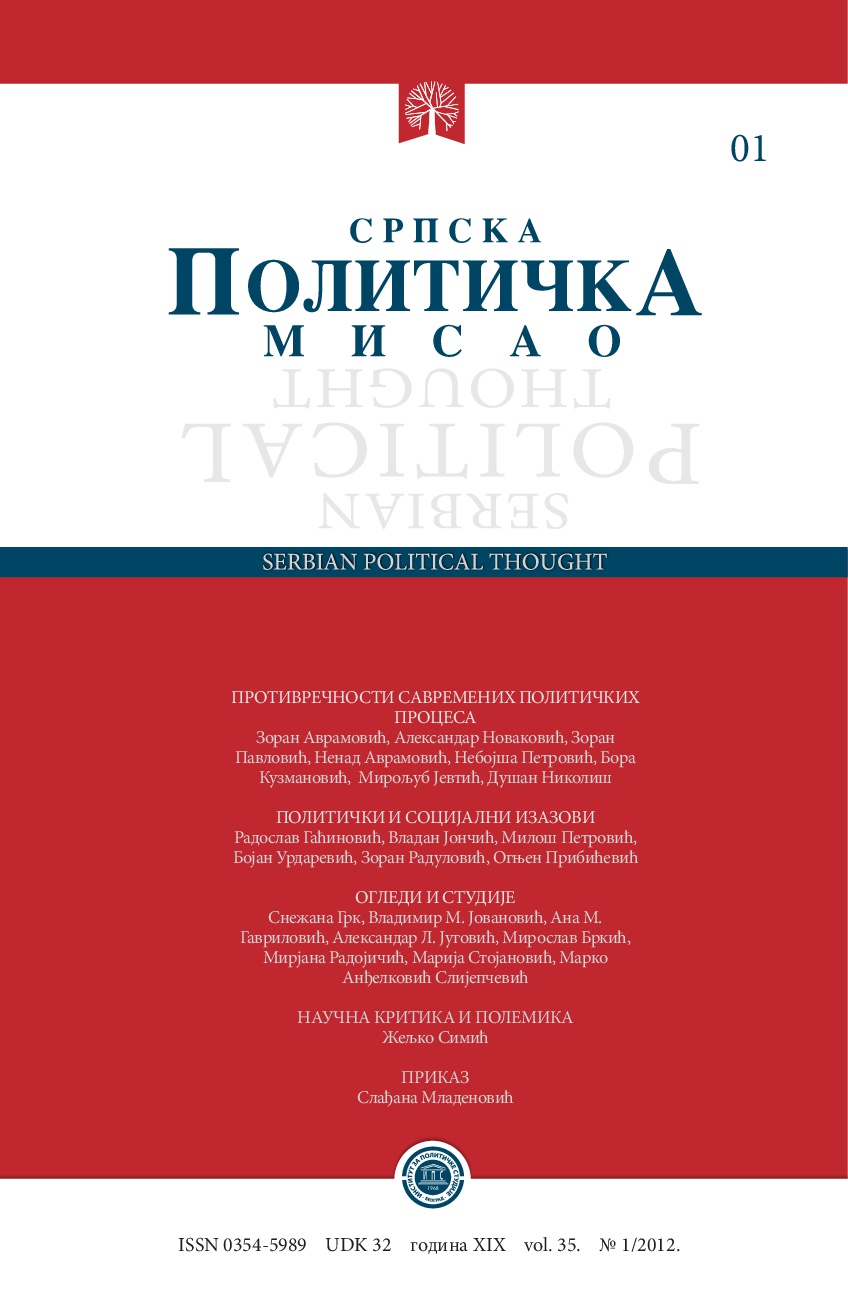 Summary/Abstract: In this article Dr Pribicevic analyses the impact of Kosovo crises on Serbian EU integrations and shaping of political scene of Serbia. Dr Pribicevic pointed out how crises started in spring 2011 when idea of split of Kosovo appeared again in Serbia and then continued with the clashes between KFOR and Serbs from north of Kosovo in order to get the control of administrative crossing Jarinje and Brnjak. During the summer 2011 German chancellor Merkel visited Serbia and asked government in Belgrade to normalize its relations with Kosovo and dissolve “parallel institutions” of Serbs in the north of Kosovo. Following this visit Serbian government continue its negotiations with Pristina and find out solutions for administrative crossings. On the other side, Belgrade and Pristina didn’t find solution for the problem of presentation of Kosovo on the regional gatherings after what European council, under the German influence, decided to postpone the decision to give Serbia the status of candidate for the EU. Therefore, Serbia remains without EU candidature in December 2011 in spite of the fact that government in Belgrade handed over general Ratko Mladic and Radovan Karadzic to Hague Tribunal as well as conducted a number of successful reforms which got very high marks from EU commission. In this article Dr Pribicevic is trying to answer several questions. Why Washington and Berlin imposed such a strong pressure on Serbia in this moment? Is split of Kosovo possible solution? Could Serbian government continue with current politics of EU and Kosovo or it should take one of these politics as a priority? How Kosovo crises influenced Serbian political scene? At the end, Kosovo crises opened the crucial question: could Serbia enter EU without “recognition of territorial integrity of Kosovo” as described by German foreign minister Westervele. Having in mind forthcoming elections in spring time 2012 author thinks that ruling Democratic Party as well as leading opposition party Sebian Progressive Party will continue with current politics “both EU and Kosovo”. Such politics will be in accordance with the public mood in Serbia which shows that support for EU integrations is declining with the growing pressure of US and Germany on Serbian Kosovo’s politics. On the other side, Serbian politics “both EU and Kosovo” is not sustainable on the long run and Serbia has to face difficult decisions in future. Also, according to the author opinion Kosovo crises showed weakness of Serbian international position. It is without important allies among key Western powers which has dominant influence in this part of Europe. Serbia has support of Russia but key influence on Kosovo has US, GB, France and Germany. These powers connected Serbia’s further progress towards EU with normalization its relations with Kosovo, knowing in advance that the time when Serbia is seeking for the EU candidature is the best time to ask Belgrade to make concessions in its Kosovo’s politics. Western powers do not expect Serbia to recognize Kosovo but they expect Serbia to accept“ territorial integrity of Kosovo”, including its north part. Why Kosovo become so important for leading Western powers? Author thinks that several reasons influenced such tough behavior of Western power towards Serbia. First, after helping them to create an independent state, US perceived Albanians as the most reliable ally in this part of Europe. Second, Germany and other big powers in Europe wants to prevent creation of new frozen conflict in Europe similar to Cyprus one, Third, all big Western powers has reserves towards Serbian foreign policy and its orientation on EU but as well as on Russia, nonalignment world, China which quite often is described in the West as sitting on the two chairs. Last but not the least, Germany as well as France is not very eager of politics of enlargement of EU in the eve of forthcoming elections in these countries scheduled for 2012 and 2013. Therefore its hesitation in this moment towards further enlargement with US pro Albanian politics creates tough dilemmas for Serbian politics in foreseeable future.