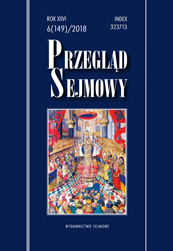 Relacje Sejmu Ustawodawczego z rządem i Naczelnikiem Państwa: system rządow w latach 1919–1921
Relations between the Legislative Sejm, the Government and the Chief of State: system of governance between 1919 and 1921

Summary/Abstract: Constructing the Polish State after the First World War required establishing a system of governance enabling consolidation of the state and its authorities. Initially, the burden of establishing a provisional system of governance fell on Józef Piin statu nascendi was headed by J. Pi: the government, formally subordinated to it, and the Chief of State. Because of its potentially infinite influence on the government, including co-deciding about its appointment, the Council of Ministers was made reliant on the changeable party coalitions within the Sejm. Political instability caused the works of both the Sejm and the Council of Ministers to be ineffective. The Chief of State, equipped with the competences of the Commander in Chief, politically supported by the Sejm, permanent in his opinions and consequently realizing them, steadily gained influence on shaping the policy of the state — including foreign and defence policy, as well as matters of the security of the state — taking advantage of intra-parliamentary and ministerial antagonisms. As a result, the system of governance formally based on parliament’s hegemony was transformed into a more parliamentary form, with conceivable balance between the Sejm, the government subordinated to it and Chief of State. Hence, the system of governance adopted in the small constitution, although formally close to assembly governance, was distinguished with features typical for parliamentary system from before its rationalisation.