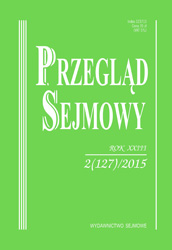 Summary/Abstract: The adoption of the April Constitution (1935) manifested Poland’s departure from the existing constitutional regulation and a response to the malfunctioning of its parliamentary system established in 1921 by the March Constitution. It was also symptomatic of the trend, well-known in European countriesin 1920s when various constitutional experiments were undertaken to overcome faults of parliamentary democracy. Among different areas of the Polish constitutional transformation, the article focuses on the form of government, seeing it as a good refl ection of the essence of this transformation. Their aims included the rejection of the principle of separation of powers, the subordination of all state authorities to the President, the reduction of the status of parliament within the polity and the release of the government of the disadvantages caused by parliamentary scrutiny. Nevertheless, the system of government enshrined in the Constitution of 1935 was not completely developed dueto political inconsistency seen prior to the outbreak of World War II.