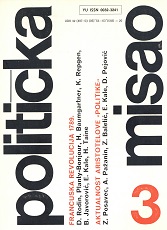 Summary/Abstract: The author discusses the differences between Plato's subjective rule of wise philosophers and Aristotle’s rule based on appropriate laws. Aristotle is critical of Plato's state communism (community of women, children, and property) because he considers the state to’ be a multiplicity by definition. This does not mean that he denies it the character of a community. According to Aristotle the state as a political community rests upon laws and customs that, being institutions of communal living, define man and his activity as well as his personal characteristics. The dangers issuing from an absolute state to which Aristotle draws attention in his critique of Plato can also be found in contemporary political theory and practice.