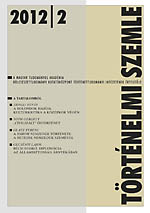 Summary/Abstract: The paper of Antal Molnár is an unconventional review about the book of Dénes Sokcsevits on the history of Croatia. It was originally held as a lecture at the successive presentations of the book at Budapest (27 May 2011) and Zagreb (5 July 2011). The work of Sokcsevits can be regarded from several aspects as a turning point in the research of Croatian history, and not only in Hungary. It encompasses a very wide spectrum both chronologically and thematically, which will surely constitute the starting point for all future Croatian-related research in Hungary and, in case of its hopeful translation into a foreign language, internationaly as well. In his study Molnár presents the merits of the book in terms of form and content: the structure is balanced, the chapters can be read individually like articles in an encyclopedia, the author’s knowledge of the sources and literature is admirable, and the notes are condensed as much as possible. He stresses the fact that Sokcsevits wrote his history of Croatia conceptually from the viewpoint of the Hungarian Crown, and territorially from that of Zagreb, and consequently it plays an outstanding role in making Hungarian historiography and public opinion conscious of our common past. The study surveys the major chronological and thematic units of the book, drawing attention in each case to those central problems which characterise the history of the individual periods, and with regard to which the monography of Sokcsevits always forms a moderate view after conflicting with each other the relevant opinions of Hungarian and Croatian scholarship. The volume can thus be read as a comparative Hungaro-Croatian historiography: whereas for the Hungarians it serves as an introduction into Croatian history writing of a kind which has not existed so far, for the Croatians it offers first-hand information on the ample research which was and is being done in Hungary on various aspects of Croation history.