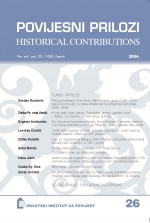 Summary/Abstract: The most important result of the literary work of Bartol Kašić was the Croatian translation of the New Testament, which was later supplemented with the translation of the Old Testament. However, in spite of the thorough preparation and lengthy negotiations the Bible-translation was not published. Croatian literary historiography has for decades tried to find the reason for this. In 2000 the critical edition of the Kašić Bible-translation was published, in the commentary of which several interesting essays look into the history of the unpublished book The author of this article began the research of the literary and missionary work of KaπiÊ in 1995, during his research in the Archives in Rome, independent from the ongoing work of the critical edition. Present essay was finished in 2000. The author, taking the previous scientific statements into consideration, shows the history of the translation on the base the documents of the Propaganda Fide Congregation, the Roman Inquisition and the Archives of the Jesuit Order in Rome, and he attempts to reveal the reason why Kašić’s translation was not published. In the appendix of this article the most important sources for this subject are also listed. Bartol Kašić, on the base of his missionary work in Bosnia and Slavonia intended to meet the religious needs of the Catholics living in Turkish territories partly with religious works written in their mother tongue that is in the Bosnian dialect of Croatian. The translation of the Bible into Croatian was also part of his literary programme, which was done between 1620 and 1636 in Raguza and Rome. The submission compiled by Kašić in 1629 is a very interesting and valuable document for the research of Kašić’s work. It was discovered by the author in the Inquisition Archives in Rome. The Roman authority - the Sacra Congregation de Propaganda Fide - supervising the missions, knew about the translating activity of the Jesuit, and supported his work. However, besides the supporters ( Propaganda Congregation and the archbishop of Raguza) the Jesuit Bible translation had serious opponents - Dalmatian and Croatian priests working around the congregation, who were working on new publication of liturgical books. The literary group led by Rafael Levaković and Ivan Mrnavić, with the support of the Dalmatian clergy developed the linguistic norms of the Croatian religious literature in the 1620s, which were based on liturgical Slav with Croatian structure. This language was very different from the one used in ordinary communication. Their conception was completely different from the literary ideas of KaπiÊ based on the living language, so they strongly opposed the publication of the Bible-translation in Rome, especially at the propaganda Congregation. Interestingly enough, the translating activity of Kašić was not supported by the Jesuit order itself. The head of the order, after its preliminary encouragement, practically withdrew its support.