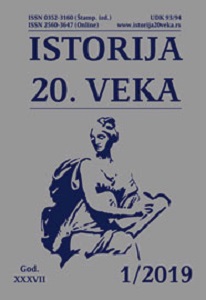 Summary/Abstract: Revolutionary terror in the regions of Nova Varoš, Prijepolje and Pljevlja was developing throughout three time periods, in three directions and in three ways. Radicalization of class conflict was unfolding in the following phases: October–December 1941, December 1941–February 1942 and February–May 1942. In the course of the said periods, class conflict was directed towards three target groups. The first was “internal enemy” i. e. allegedly unreliable and hostile fighters within partisan forces and even within CPY. The second referred to all those considered as “ideological enemies” while the third one referred to the population opposing the orders of the CPY. The most frequent forms of punishment were executions (sometimes even mass) mostly without clearly determined verdict, seizure of the property, expulsion from homes and (or) burning the homes down. In that way partisans killed (sometimes in very brutal ways) more than 190 people in regions of Nova Varoš, Prijepolje and Pljevlja. Most affected by communist repression were citizens of Nova Varoš Pljevlja and its surrounding. Consequently, both the partisans movement and the CPY as its vanguard lost the support of the local population, which fought back and started turning to the Chetniks.