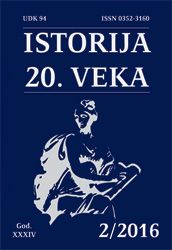 Summary/Abstract: At the beginning of 1942, the ideological conflict in Montenegro sharpened due to revolutionary terror of the Communists. Captain Pavle Djurišić saw the solution for this difficult situation in cooperation with the Italian military authorities in Montenegro. Therefore, he started negotiating with them via command of ’Venice’ division, stationed in Berane. Initial meetings in January were marked by the distrust of Italians towards Djurišić, first of all owing to his participation in July uprising, relations with General Dragoljub Mihailović and substantial quantity of weapons he asked for. The attitude of Italian occupier towards the military cooperation with him changed during the second half of January, particularly thanks to the success he achieved in the fight with the Communist forces In February 1942 and confidential information he provided from the field. The military cooperation was established at the end of March by signing the five point contract, followed by providing Djurišić with weapons, ammunition, military material and food he had asked for at the beginning of January. Italian help, not only in weapons, but also in logistics enabled the officers of Yugoslav Homeland Army to strengthen and consolidate their troops and take advantage over the Communists in the conflict.