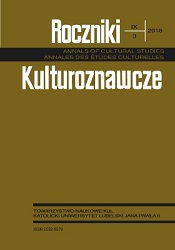 Summary/Abstract: The article examines an interpretation possibility to read the structure of the Book of Job as a drama structure. It shows that some of the apparent paradoxes and contradictions in the text can be understood as an inner logic of a drama. The seeming incoherence of narrative Prolog and Job's later statements can be easily reconciled by following through the dramatic cause-effect sequences and seeing the events as happening in permanently changing present. The dramatic approach enables to see the meeting between God and Satan as an unsuccessfully attempt to make a bet. Deprived from omniscient narrator’s perspective, the drama shows various attitudes, without pointing directly which is the best one. Full of paradoxes and contradictory statements, the main hero’s style can be compared with a modern stream of consciousness. The culminating point of the drama shows a durable change in Jobs posture and leads to surprising changes on a metalinguistic level.