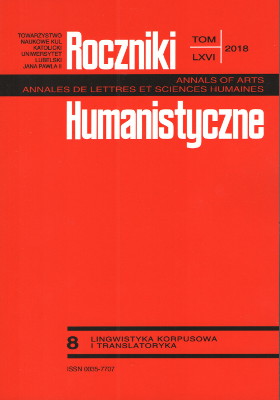 Summary/Abstract: Social categories in the writings of Saint Francis of Assisi and in Franciscan hagiography were till now an object of interest just in the historiographic aspect. Present study touches this issue, but focuses its attention on the linguistic dimension. The subject of the analysis is basically a group of three fragments, rich in names of diverse social categories: The story of true and perfect joy, the second edition of The letter to the faithful and the 23rd chapter of the First rule. They show the extensive social awareness of the author, who is sensitive to problems related to the complexity of the social structure of the contemporary world and the divisions result from it. The rhetoric of the analysed texts turns out to be extremely rich: enumerations, diphthologies, multiples, epiphones. They all testify to the emotional involvement of the author in the content of the enunciation, and confirming his awareness and linguistic maturity as well. Saint Francis in the analysed texts appears as a man who is keenly interested in the situation of his contemporary world and individual social groups, including women and children, which in his era was not so obvious. It confirms the Christian truth about the common perspective of eternity and the universality of salvation, independent of earthly divisions and differences.