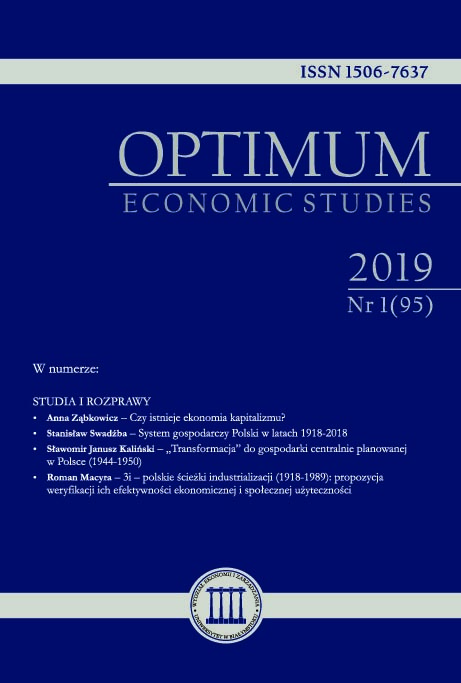 the proposal for the verification of their economic and social efficiency

Summary/Abstract: Purpose – After 1918, in the new political circumstances, the state of the national economy revealed itself in different variations, on one hand, as a remnant of the military heritage and the resulting various positive and negative circumstances, and on the other hand, somehow pointing to the existing entrepreneurial potential accumulated in the society. The result of this balance was clearly negative and in accordance to the conditions, various governmental projects were initiated, the purpose of which was to change the economic structure of the state. Paying attention to the effects of the state's economic policy in the context of the expenditure incurred since the moment of regaining independence is perhaps a different proposal, but precisely in the context of the economic effectiveness of the assessment of these state actions. This is accompanied by the awareness of the systemic diversity that defines both the goals and the effects of these economic policies. Research methodology – The analysis was based on the studies of statistical data and scientific and source studies in terms of their interpretation to the formulated thesis about the relationship between inputs and outcomes. Finding – Preliminary results, which stems from too few analyzed economic indicators, only indicate the direction of possible further studies. They emphasize to the debatability of the final assessments if they are based only on quantitative measures. I point to the possible necessity, to consider other potential fields of correlation between the final effects and the outlays used for this purpose. Originality/value – The difference is that almost all presentations of economic indicators show that in all the individual industrialization paths an economic progress has beed noted, but was this effect, in fact, was positive in relation to the expenditure incurred – this is what I am trying to draw attention to in this text.