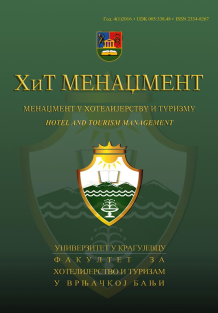 Summary/Abstract: Over the centuries, cities have been traditional places of gathering of large number of people. City tourism itself appears as a by-product of narrowly motivated forms of traveling, such as cultural and religious, spa and seaside tourism. City breaks, which have become a contemporary trend and phenomenon in the global tourism industry, have got an increasing number of tourists who want to spend their short vacations, holidays or weekends in cities. The aim of this paper is to highlight the basic theoretical characteristics of the tourism in capital cities. The fact that there is not enough literature that deals with this issue proves that the tourism in cities is observed too partially through thematic forms of tourism such as cultural, business, sports, еvent or city break tourism.