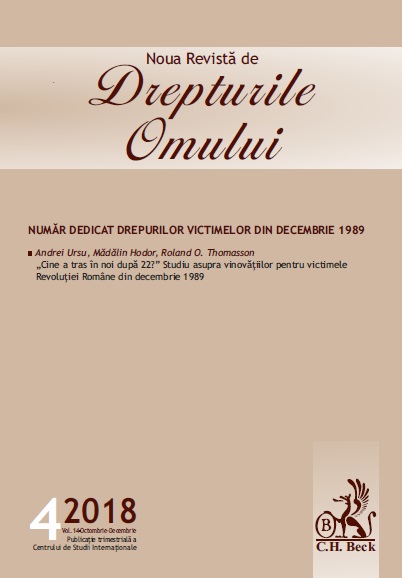 „Cine a tras în noi după 22?” Studiu asupra vinovățiilor pentru victimele Revoluției Române din decembrie 1989
„Who shot at us after 22?” Study on those guilty for the victims of the Romanian Revolution of December 1989

Summary/Abstract: For 28 years, justice for the bloody events of the Romanian Revolution has not been served. In the ”Timisoara gang” trial of the '90s, only a minute fraction of the guilty were investigated and indicted, and fewer yet were convicted. There has been no justice for any of the post-December 22nd victims. Through a massive disinformation campaign (”legendization”) by a number of former Securitate operatives and informers, the question of who was responsible for the December 1989 dead and wounded was obfuscated through a series of conspiracy theories that defy the historical truth and collective memory, the latter of which they in fact tried to alter. Through their proxies in the media, these ”alternative facts” ended up becoming common currency among the public at large. One of these theories is that ”the CFSN and Army” group would have orchestrated a diversion, where there were no terrorists, but only soldiers and revolutionaries shooting each other in panic. The last Revolution-related communique of the Military Prosecutor Office (S.P.M.) seems to fit the mold of that false narrative. If it is true that ”Iliescu Ion accepted the military measures, some of which had a clear diversionist character, and made them official”, then, by consequence, there must have existed those who ”unofficially” proposed those measures, as well as those who executed them: the shooters, the ones who installed the simulators, the terrorists. All of these should have been identified and indicted as well. Along with a large and diverse set of testimonies and historical and legal documents from prior investigations and trials, the study presents a set of documents recently discovered at C.N.S.A.S. which reveal a consistent and logical tableau of those responsible for the victims of the Revolution. These pieces of evidence show that the victims were not all the result of „friendly fire”. The terrorist acts, well-known in the days of the Revolution, are those that triggered the „diversion”, according to a pre-established plan. The plan was part of the ”resistance fight” envisaged by Ceausescu in the event of a foreign invasion or a popular revolt that would have chased him from power. Besides gunfire simulators, the shots also had the goal of killing, selectively, some of the revolutionaries and soldiers, for the sole purpose of panicking the population and the Army, and thus weakening the Revolution. The study identifies certain characteristics of the shootings and of the shooters, which lead to the conclusion that the latter were primarily Securitate members, especially from the 5th Directorate and U.S.L.A. This fact was confirmed by some of the Securitate heads, some of the C.F.S.N. leaders, several Army generals, and the ” Popescu-Necșești” senatorial commission report. For example, a large number of witnesses (medical doctors, military personnel, victims’ relatives), recount that the terrorists used light, caliber 5.62mm weapons (clearly for camouflage and greater mobility). There is no evidence these weapons existed in the Army’s arsenal. Instead, a recently discovered C.N.S.A.S document shows without a doubt that such weapons were used by the Securitate until December 26. The prosecutors can thus identify who shot (based on the weapons’ registration numbers). The study demonstrates this investigative path, exposing the identity of the Timisoare Securitate shooters (based on the similar ”Ambrozie lists”). These shooters were never investigated either. Finally, the study analyzes how we ended up with such a blatant, almost blanket immunity for Ceausescu’s main repressive institution. We look at the investigations which in 1990 debuted with Securitate investigators as prosecutors, the disappearance of evidence and dead bodies, and the suspicious freeing of all terrorists by Securitate proxies. The paper provides an overview of the disinformation mechanisms by which the Securitate version was propagated in the mass media and even among military prosecutors.