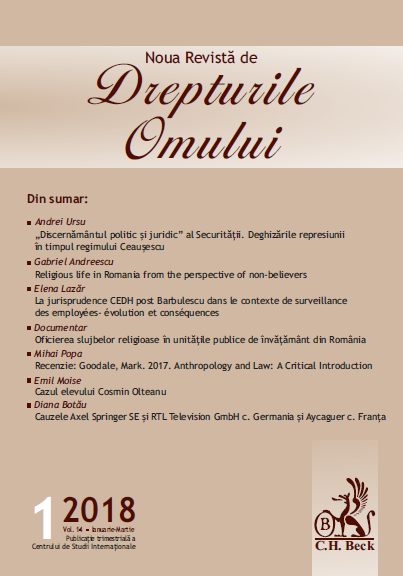 Summary/Abstract: The stated goal of Ceausescu’s political repression was to create the image of an opposition-free Romania. The Securitate focused its efforts on the „neutralization”, „from the start and with discerning political and judicial judgement”, of „dissident nuclei”; on discovering „hostile writings” and „intentions”; and on stopping the flow of letters to Radio Free Europe „defaming the situation in the country” and the dictatorial couple. Based on dossiers existing at CNSAS, this paper analyzes what the Securitate meant by „discerning political and judicial judgement”: camouflaging the repression „usually under the cover of the Militia” and disguising the „actions against the socialist order” as „nonpolitical crimes”. As much as possible, the Securitate officers were ordered to „dissimulate themselves” and only prosecute political offenses as such „when there was no other option”. The statistics reviewed show that thousands of lesser-known cases of opposition existed, which were „resolved” by the Securitate through fake trials, similar to that of Gheorghe Ursu. The conclusion is that Romania had a significantly larger opposition in the ’70s and ’80s than was previously known. Thanks to concealment, the dissidents formally investigated and convicted for political crimes represented but a small percentage of the total number of victims of the final two decades of communism in Romania.

„Cine a tras în noi după 22?” Studiu asupra vinovățiilor pentru victimele Revoluției Române din decembrie 1989 „Who shot at us after 22?” Study on those guilty for the victims of the Romanian Revolution of December 1989 2018
2021 © CEEOL. ALL Rights Reserved. Privacy Policy | Terms & Conditions of use
ICB - InterConsult Bulgaria ver.1.5.2118