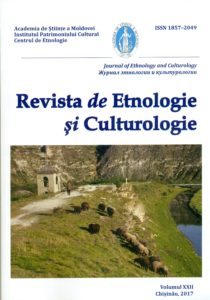 Summary/Abstract: Based on materials obtained through field researchcarried out in 2008–2009 among representatives of the Belarusian Diaspora of Moldova, the article discusses the ethnic stereotypes typical of Belarusians. In the course of thesurvey, the respondents were asked to identify, from theirpoint of view, the important traits typical of the representatives of the Belarusian ethnic group as a whole and, tosome extent, distinguish them from those of other peoples.In the received free answers, the respondents mention certain values and characteristics, which were grouped intoseveral blocks in accordance with the frequency of theirbeing mentioned. By generalizing the respondents’ statements about the traits of the Belarusian national character,the authors succeeded in revealing the main features of thenational character in the view of the Belarusians of Moldova, the importance of their social attitudes, value orientations, etc. In the opinion of the respondents, the specificcharacter of the Belarusians was affected by concrete historical conditions of life. In conclusion, the authors statethat the Belarusians of Moldova, who have lived for a longtime away from the ethnic homeland, have preserved notonly their identity, but also the national traits.