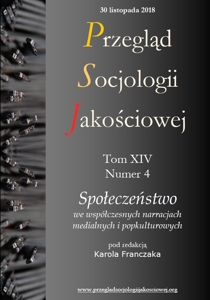 Summary/Abstract: The paper aims to describe and analyze a tendency in the framework of the broader construct of “motherhood,” named as “new traditionalism,” as well as to analyze ideas and assumptions present in its background. This term refers to “a return to past,” which is observable in motherhood and is reflected in the sphere of values as well as practices. Its features are discussed by an example of the “Dzieci są ważne” portal [Kids are important] (a qualitative analysis of the article’s content was conducted). In the vision of motherhood proposed by “new traditionalists,” one may observe double re-traditionalization. The first lies in the return to former “caring techniques” and the second is connected with a visible transition towards a more traditional division of work (justified by an essentialist vision of gender roles). The discourse of “new traditionalism” is not free from internal tensions and paradoxes: a suggested return to positively evaluated nature is mediated by culture and education; furthermore, a return to tradition is mediated by achievements of the feminist movement (the woman has right to choose, thus she can also decide to retreat to the private sphere). Despite of assumed “minimalism,” practices of “new traditionalism” can be realized only by the upper middle and the upper class.