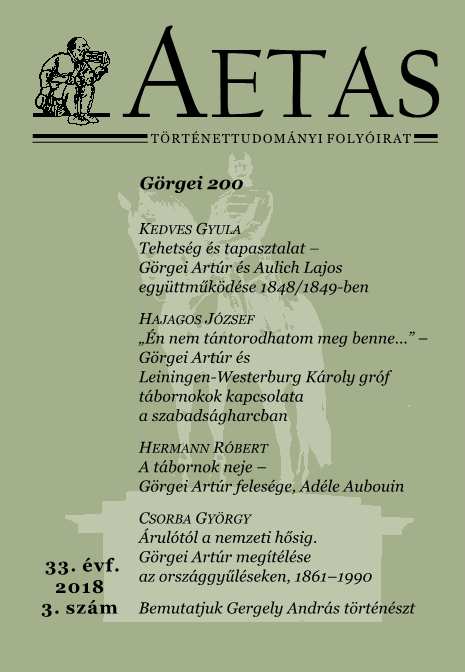 Summary/Abstract: General Artúr Görgei’s (1818–1916) role in the Hungarian War of Independence, and the baseless accusations of betrayal he had to endure until the end of his life, and even longer, are all well known to professional audiences and laypeople alike. This study aims to examine and interpret the changes in Görgei’s perception in lawmaking from 1861, the first national assembly after Hungary’s defeat in the War of Independence, to 1990, the end of communism in Hungary. In the era of dualism Görgei’s name meant more than itself in the opposition’s political discourse: it was a synonym of betrayal, a trope that everyone understood, along with the betrayal at Világos, and everyone could decode its message. The opposition categorically refused the Austro-Hungarian Compromise and equated the politics of the Tisza government with the accusations of betrayal and false myths around the late commander. With the passing of time after the Compromise, as most figures of the War of Independence died, the accusations of betrayal got rarer, and a calm, impartial approach became prevalent. Görgei’s place in national memory changed drastically between the two World Wars, the accusations of betrayal died off. His merits as a commander and exemplary behavior were already respected in the era of dualism, and between the World Wars, his role and merits as a soldier became indisputable in the national assembly. After World War II his name wasn’t mentioned a single time until the Regime Change, which might seem like a missed opportunity in the creation of the totalitarian system since the traitor myth was renewed and raised into official ideology status by the communists. In about 75 years the perception of Artúr Görgei’s historical role changed from traitor to national hero in the national assembly.

Anglia keleti hangja The Eastern voice of England 2016 A dzsihád kihirdetése a Monarchiában az első világháború idején The Declaration of Jihad in the Monarchy during World War I 2017
2022 © CEEOL. ALL Rights Reserved. Privacy Policy | Terms & Conditions of use
ICB - InterConsult Bulgaria ver.1.7.2509