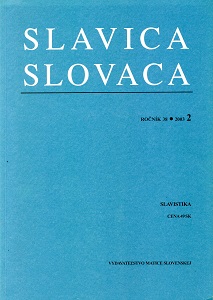 Summary/Abstract: The paper deals with the question of mutual cultural relationships between ťhe Slovák Republic and the Independent State of Croatia in the periód from 1941 to 1945. Slovaks as well as Croatians were part of multi-ethnic states after the First World War. During the inter-war years, both nations struggled for their emancipation. However, immidiately after their independent states had become reality, both aligned themselves with the Rome-Berlin-Tokyo Axis and concluded šuch treaties as to restrict their sover-eignty. The author provides an insight into the process of developing Slovak-Craotian cultural cooperation influenced by the then political situation.