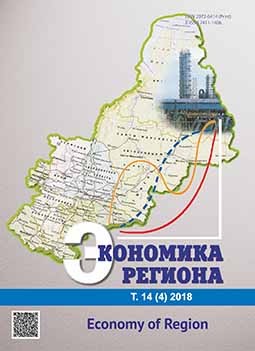 Summary/Abstract: The purpose of this study is to identify factors that affect the level of employment in Russian regions. However, Russia is not a homogeneous country, and this effect may not be the same for all regions. That is why we split the regions of Russia into three groups, depending on the state of the labor market in this and neighboring regions. The HH (high-high) group comprises regions with a favorable situation in their labor markets, and which are also surrounded mostly by prosperous regions. Two groups of regions with a less favorable situation are located respectively in the south of Russia (LL1, low-low group 1) and southern Siberia and Zabaikalye (LL2, low-low group 2). We considered the twelve-year period from 2005 to 2016. As explanatory variables, we used variables for the attractiveness of the region, demographic characteristics of the region, and the degree of diversity of employees by economic activities. We tested hypotheses about differences in 1) the spatial effects and 2) the impact of the various explanatory variables for these groups of variables. To test our main hypotheses, we used spatial regression dynamic models estimated with the help of the generalized method of moments. Both main hypotheses received empirical confirmation. Spatial effects were different. The regions of the LL2 group are not affected by the situation in other local markets; regions of LL1 and HH groups are affected by the rest of Russia’s regions, and the extent of this influence decreases with the increase in geographical distance between regions. Moreover, the regions of the LL1 group compete with neighboring regions: if the situation in one of them improves, then it draws on the resources of the others. Regarding the impact of the explanatory variables, the “group effect” was revealed for the variables: share of urban population, net migration rate, shares of people below and above working age, share of people with higher education. Our results can favor the better design of national and regional policies to improve labor market performance in Russia based on the heterogeneity of the Russian regions.