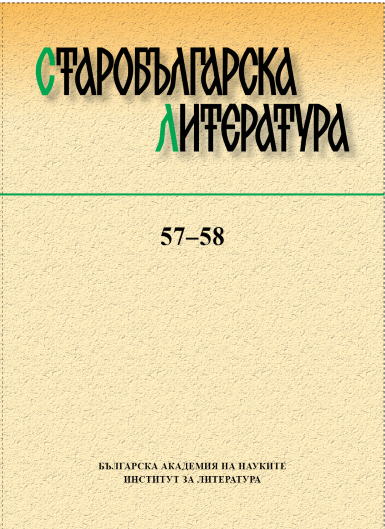 Summary/Abstract: The article takes as a starting point the account about the “Slavic books” (книгы словенскыѥ –Vita Constantini 17:5) brought to Rome by the Slavic apostles Cyrill and Methodius, and their blessing by Pope Adrian II. By “Slavic books,” scholars usually mean loosely defined “liturgical books” that could reasonably be identified with the Slavonic Gospel (словѣньское евангелиѥ) mentioned in Vita Methodii 6:1. The liturgical books referred to in VC, however, still remain undefined, as it remains unclear who completed their translations, when and where. In an attempt to answer these questions, the author considers some passages from the Lives of the Slavic apostles with explicit references to “books,” and “letters.”Careful reexamination of the vitas’ entire manuscript tradition cannot support the assumption that, after his arrival in Moravia, Constantine continued to engage in translation activities. Taking up a proposal advanced in the past by other scholars, the article assumes that, instead of translating some undefined “liturgical texts” (VC 15:2 вьсь црк҃овныи чинь прѣложь/прїимь), Constantine “transferred”, “transcribed”, and “fixed” in Slavic letters texts that had already been translated (by the way, different passages of VC mention Constantine’s dispute with the Latin and Franco-Germanic clergy that related not so much to the translation of books as to the Slavic letters – see VC 15 and 16). For a more precise identification of these translations, the article briefly reexamines the literature produced by Irish and Frankish missionaries in the dioceses of Salzburg, Regensburg, Freising, Passau during the 7th and 8th centuries, as well as translations made by the Frankish clergy in the 9th century. The interpretation proposed in this article fits well with the Pope’s willingness to bless books written in Slavonic, since the practice of translating [essential Christian] texts into local languages served a well-established and long-standing missionary program, one that aimed far beyond the Slavs of Moravia. Through this politics, the papacy could regain control of territories that had previously been under the jurisdiction of Rome, yet had meanwhile fallen under the control of the Franks.In conclusion, the author challenges us to reread the Cyrillo-Methodian sources afresh, without any theoretical nor ideological bias, keeping in mind that these texts are primarily literary and ideologically inflected works, not historical sources.