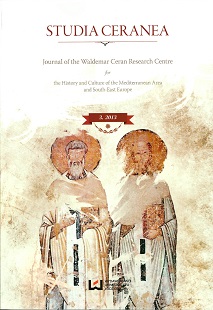 Summary/Abstract: The article deals with the case of the so-called “biblical thematic clue” (a definition introduced by R. Picchio), that is a rhetorical device allegedly widely spread in the medieval Church Slavonic literary code. Despite a large number of studies, appeared in the last decades and mostly inspired by Picchio’s theory, scholars have failed so far to produce a wide theoretical outline of this issue, moreover checking it on the basis of a narrow circle of texts (mostly in the field of hagiography and homiletics). Consequently, several methodological questions remain to a large extent unexplored. For instance: What actually is a ‘thematic clue’ and at which point of the expositio a biblical reference is expected to be found in order to be considered as a ‘thematic clue’? What degree of adherence to a previous model a ‘thematic clue’ must have in order to be recognized as such? To what extent was a medieval man of letters aware in using this rhetorical device? And apart from this, shall the ‘thematic clue’ always be interpreted as a case of ‘intertextuality’, i.e. as result of an intentional quotation of a well-defined literary model, or may it sometimes be explained also as a phenomenon of ‘interdiscoursiveness’, i.e. a unintentional quotation drawn not from a definite biblical or patristic model (‘parole’), yet from a biblical-liturgical ‘langue’?) Besides these and other issues, still open remains the question whether it is acceptable to consider the ‘thematic clue’ as an exclusive feature of the Old Church Slavonic literature, or rather a rhetorical device known even to other traditions? In this regard, the author offers a brief survey illustrating how different literary systems, over more than two thousand years, have made use of quotations from authoritative models in the introductory lines of a text or even in incipit. Examples of such a rhetorical strategy are pointed out in ancient Greek and Latin poetry, where is to be found the typical use of the so-called ‘motto’, i.e. an allusive quotation from a well-known model (primarily Homer) in the first verse of a poem, functioning as ‘self-nscription’ by the poet in a literary canon (see e.g. Callimacus, Horace, Catullus quoting Homer or Alcaeus, etc.). In more recent times, the ancient use of ‘motto’ gains strenght inside all Christian traditions, where the main source for quotations becomes the Holy Bible: for example, in Middle Latin liturgical poetry (see e.g. Paulinus of Nola, Notker Balbulus), in the Goliardic poetry (see the Archpoet of Cologne, etc.), as well as in Slavic and Byzantine hymnography. An interesting typological parallel to the Slavonic ‘thematic clues’ is to be found in Western paraliturgical practice of the so-called ‘thematic verse’, customarily in use in medieval Franciscan and Dominican homiletics...